I occasionally write little tidbits of code for some task at hand. Usually its has something to do with qmail, but not always. 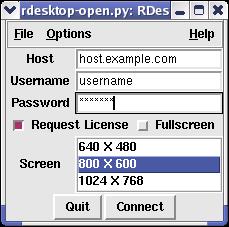 rdesktop-open.py is a python script that I use as a graphical frontend to RDesktop, a great RDP client for Linux.

It's not elaborate, but it gets the job. The 'Request License' feature of rdesktop seems to be gone with version 1.2. I will have a new version out soon to cope with this, but in the mean time leave the button checked when using rdesktop-open. If anyone has a patch to fix this I will gladly apply it here for everyone else.

This is a script to help with setting up TMDA on vpopmail accounts.

vadduser-tmda is now distributed in the contrib/ directory of the TMDA source, beginning with version 0.70.

The latest version of the script can be downloaded separate via the TMDA Subversion repository here.

Installation instructions are in included in the top of the vadduser-tmda file.

Adjust the variables at the top of the vadduser-tmda script to suit your site. The vtmdarc file is used for any site specific variables that you want to go into every vpopmail users .tmda/config file. You can use any of the variables that are declared in the vadduser-tmda script ($VUSERDIR, $VDOMDIR, etc) to help customize things. Otherwise it looks exactly like a standard .tmda/config file.

Call the vadduser-tmda script exactly as you would call vadduser, using all the same command line switches. Everything I have tested with it so far seems to work, but I am certain there are things that need to be fixed. Please let me know if you find something that isn't correct.

Here is a complete list of variables available to etc/vtmdarc:

Please send any bug reports to cwright at standblue . net

spamchart-report.py is a script for use with Joe Stump's SpamChart Project. Instructions and usage are listed in the top of the file, but here they are anyway for reference: